Fridays have always been known as the day when you eat fish. This is because Christians and Catholics used to fast on this day and abstain from eating meat. And so they would feast on fish instead. Nowadays it’s not really a tradition that has been kept, although perhaps the older generation like to have fish on Fridays  probably more out of habit than religion.
I’m not a practising religious person myself, however I am a bit of a traditionalist sometimes (especially when it comes to food!) And since it’s Friday tomorrow, I thought I would share with you a recipe I tried out recently from a book that was gifted to me two Christmases ago, ‘Two Greedy Italians Eat Italy‘ by Antonio Carluccio and Gennaro Contaldo. The recipe is for a fish soup-stew, a heavenly meal if you like seafood.
The two Italians state in their book that no more than 5 types of fish go into this cacciuco from the port of Livorno in Tuscany. This  is because they put one for every ‘C’ in the name!Hope you enjoy! And please let me know as always if you try this recipe. 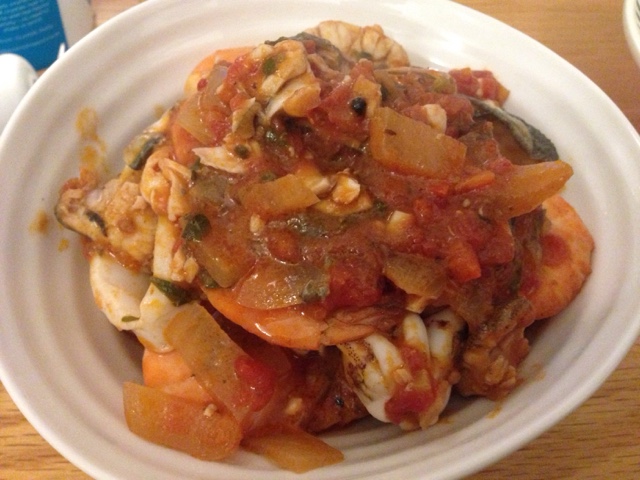 Notes – I have slightly adapted this recipe to make it for two people rather than 6-8 as stated in the book. I also only used 4 different types of fish/seafood, as there wasn’t a lot of choice at my supermarket!

Changes – I felt this recipe needed more sauce to make it more soup-like, so if you like it this way too, perhaps add in a bit more  red wine and another half a tin of chopped tomatoes. If you like it more stew-like, then keep it as stated below.

1. Clean and prepare your fish by cutting the fish into large chunks and seafood into good sized pieces for eating.

2. Fry the oil, onion and garlic in a large pan.

3. Add the tomatoes, wine, chilli, parsley and fennel seeds, and season with salt and pepper. Cook for 15 minutes.

4. Add the fish that takes the longest to cook, to the pan first (monkfish is one of these), and then add the more tender fish (red mullet, sole). Add the shellfish last (mussels need to be THE last as they take no time at all – they are done when open. Do not use any that are open before cooking, unless they close if tapped). Cook for 5 minutes until the fish is cooked.

5. Rub the bread with the garlic clove and drizzle with olive oil. Place two slices in each bowl, and when the fish is ready, more over the stew/soup, and serve.

I love a good pasta dish, especially when you can tell a lot of care and time has been put into the sauce. A sauce made with love! The following recipe was taken from the book Leon, of which I had bought for me second-hand (although it’s […]

Usually Easter is a chocolate lover’s favourite time of year, but as there are always an abundance of chocolatey recipes going around, I thought I’d try and bake something a bit different! I originally found this recipe on Pinterest, on www.somethingswanky.com but I’ve mixed and changed it up a little […]

This week is UK Coffee week! I know, I had no idea either until recently joining with the Food Year Link Up (links below). I’m not the person to turn away coffee, so I thought in aid of the celebration of this wondrous bean, I would […]